10 Tips to Increase Engagement for Your Brand on Twitter 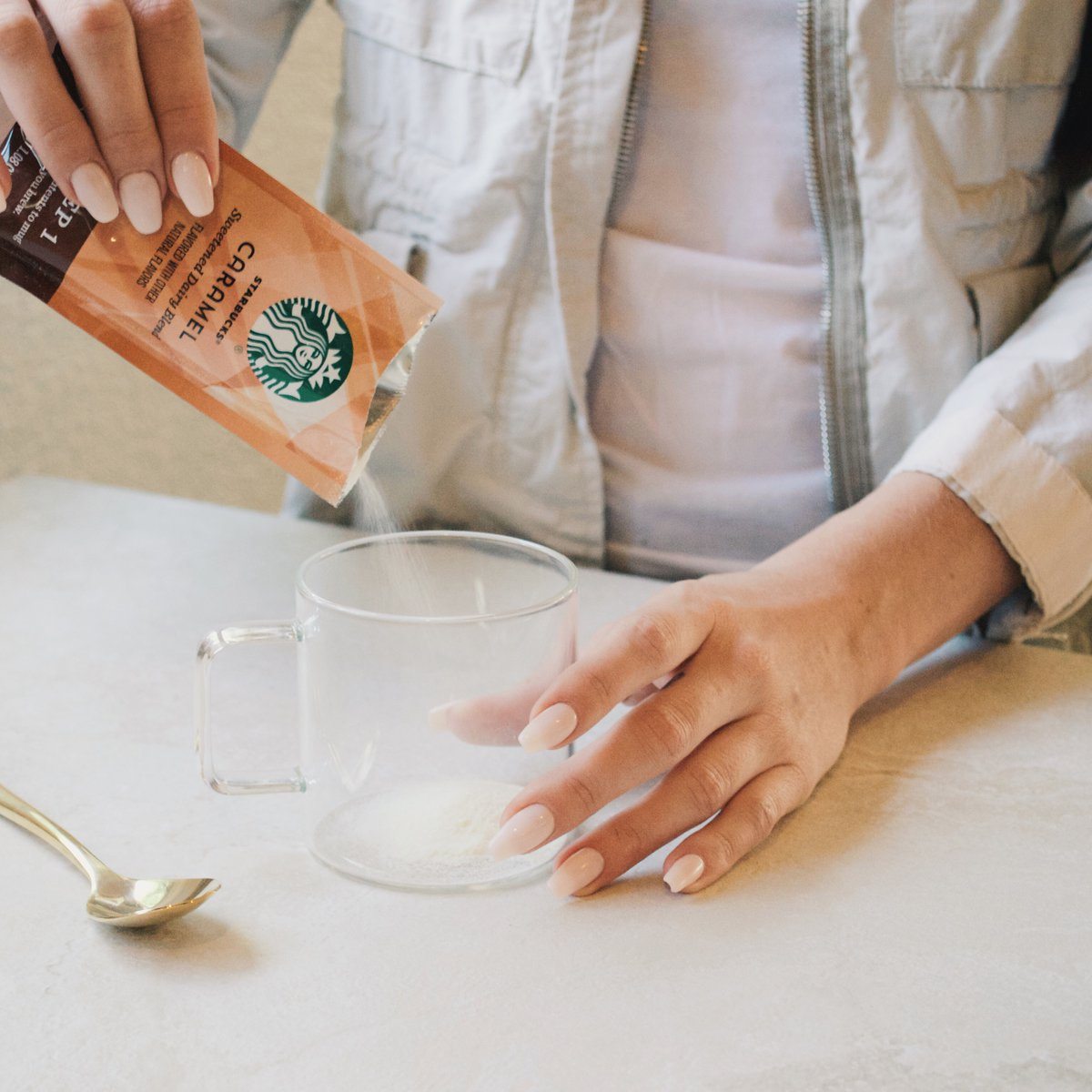 Over the last few years, Twitter has evolved as one of the most popular and most versatile social networks for businesses to communicate with their audience. The fact that Twitter keeps adding cool, new features every now and then makes things even more interesting for marketers and brand managers.

In this post, we’ll look at 10 ways in which businesses can use Twitter to more effectively engage their audience and build their brand presence.

One of the best ways to engage your audience on Twitter is to create content specifically designed for the platform. Because of the character limit and the real-time nature of Twitter, the kind of content that usually does well is “snackable” content – standalone tweets that tell a short, but effective, story in themselves.

But, of course, for the story to be effective and to make people want to engage with it, it has to also evoke emotion. Some brands do a great job of telling these stories by sharing content that makes people stop and take notice, either by surprising them or making them laugh. Sometimes they even manage to do both of these two things together.

For example, Durex recently surprised people by announcing a new “Eggplant flavored condom” over a Tweet: 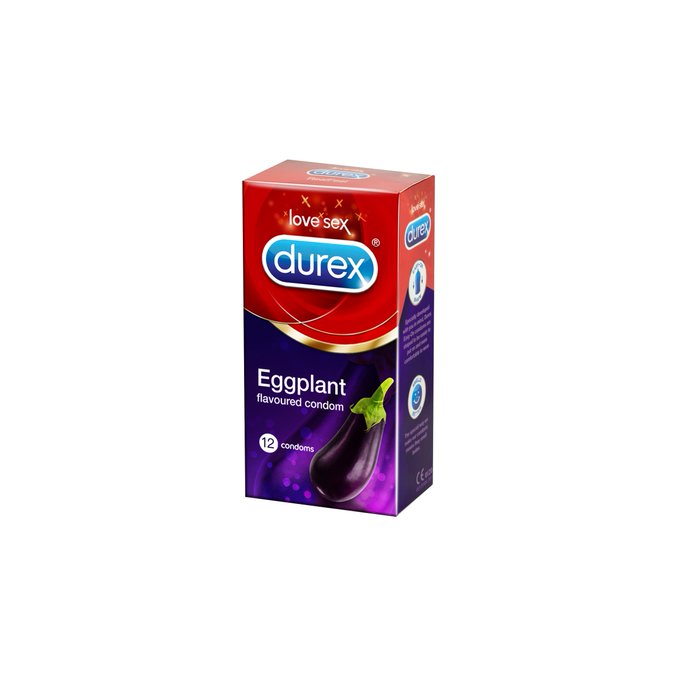 Later the same day, they revealed that this was actually a part of their campaign to convince emoji makers to make a condom emoji.

Apart from getting them a LOT of attention on Twitter, their tweet also led to the story being featured by popular publications like CNBC, Motherboard and Entrepreneur. 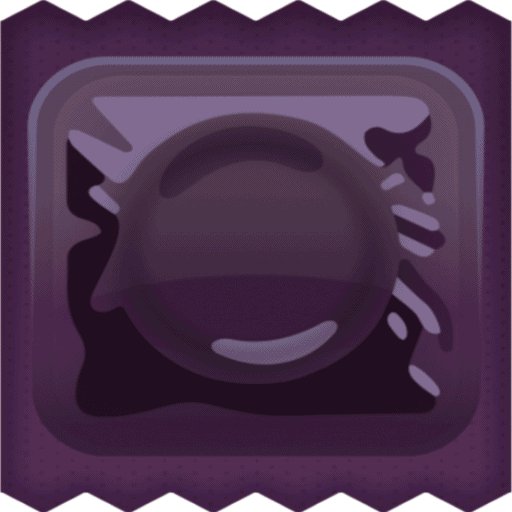 You got us, there’s no Eggplant condom! But why no#CondomEmoji? RT if you agree emoji makers should make one!

Of course, it’s not easy to predict what kind of content will catch on and generate significant attention for your brand – the only way to find out is to be a little adventurous and experiment with themes, especially humor.

A word of caution though – when creating content or campaigns which are “controversial” in nature, always do a test by running it by a small group of trusted people to gauge their reactions first. These could be your colleagues, team-members or partners.

This’ll help you fine-tune your content and iron out any issues before sharing it with your Twitter audience.

2. Use the poll feature

Twitter polls are a relatively new way for brands to engage their audience on Twitter. Poll tweets are different from regular tweets because Twitter lets you add use up all of your 140 characters in addition to the poll responses, with up to 25 characters for each option (and including up to 4 options). That’s a lot of space for creativity.

Another great thing about Twitter Polls is the anonymity – anonymous votes can generate more audience participation. And just like regular tweets, polls can be retweeted too, helping ensure you get additional reach, votes and participation.

As a part of the condom emoji campaign example I shared above, for example, Durex ran this follow-up poll that received almost 12,000 votes:

For example, you can use multiple images to tell a story in a single tweet – this is called a Twitter photo collage and can include up to 4 images.

I personally like how Starbucks uses visuals in tweets to promote love for their caffeinated beverages. 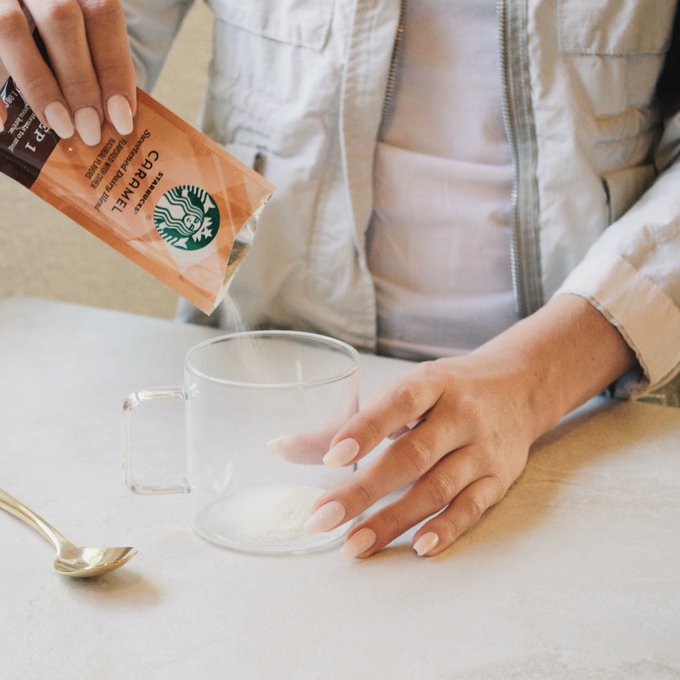 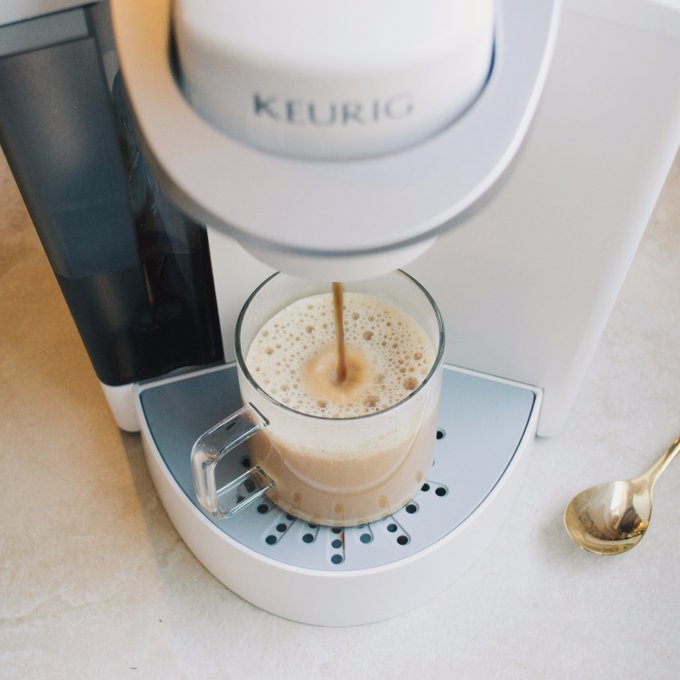 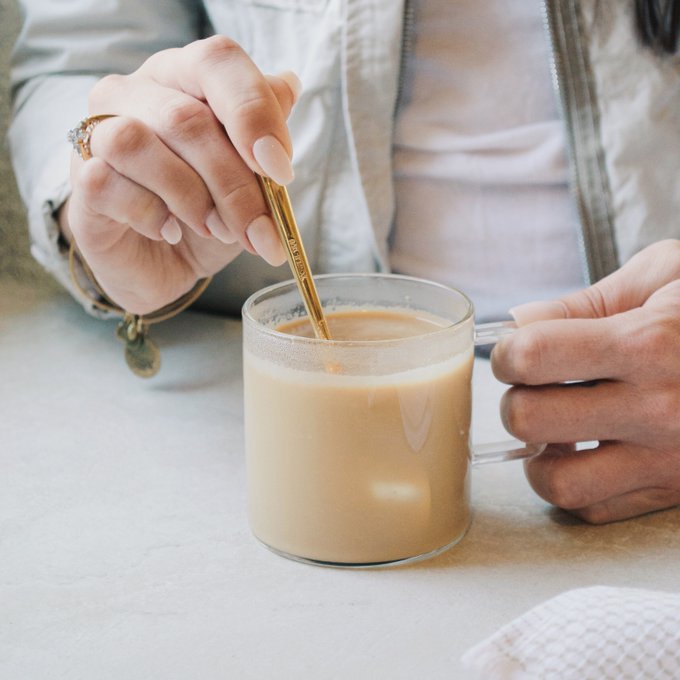 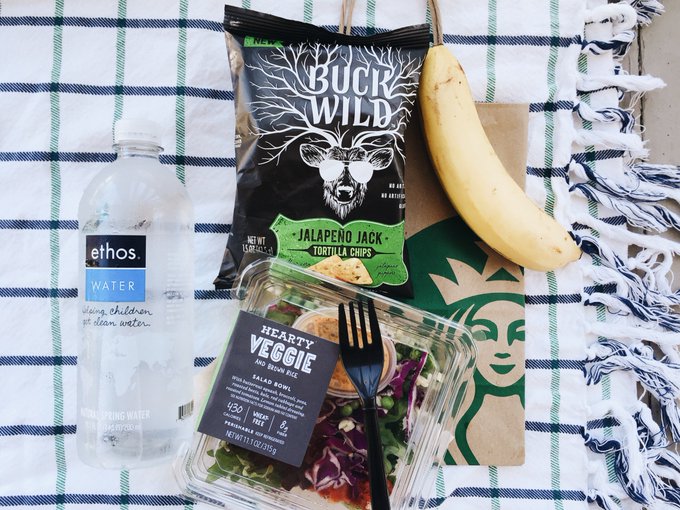 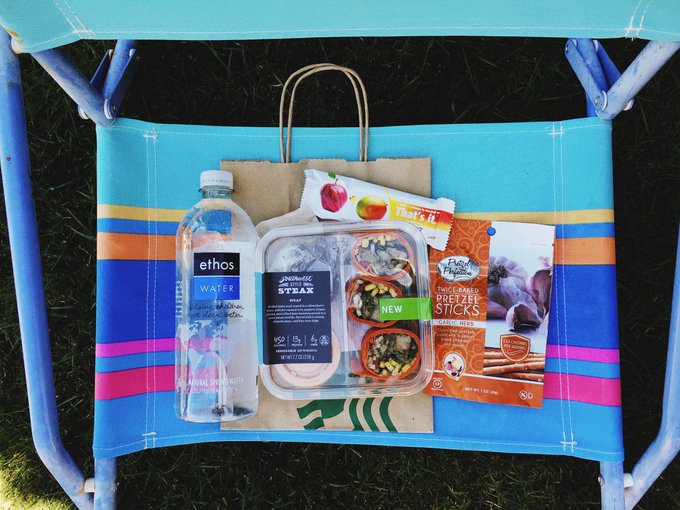 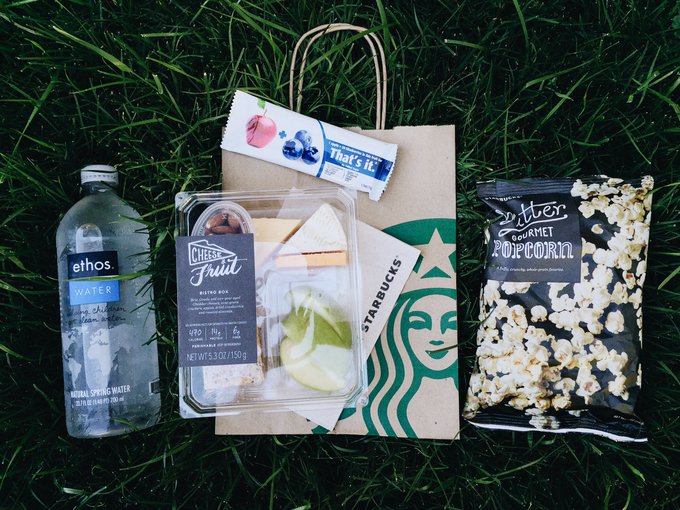 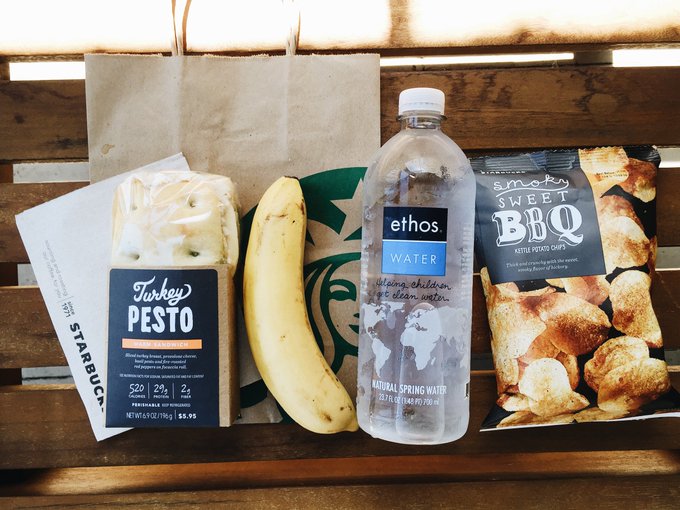 Another fun way to visually engage your audience is with GIFs. You can create your own GIFs or use inbuilt GIFs from Twitter’s library.

A good recent example is Denny’s tweet just before the much-anticipated iPhone 7 was announced by Apple: 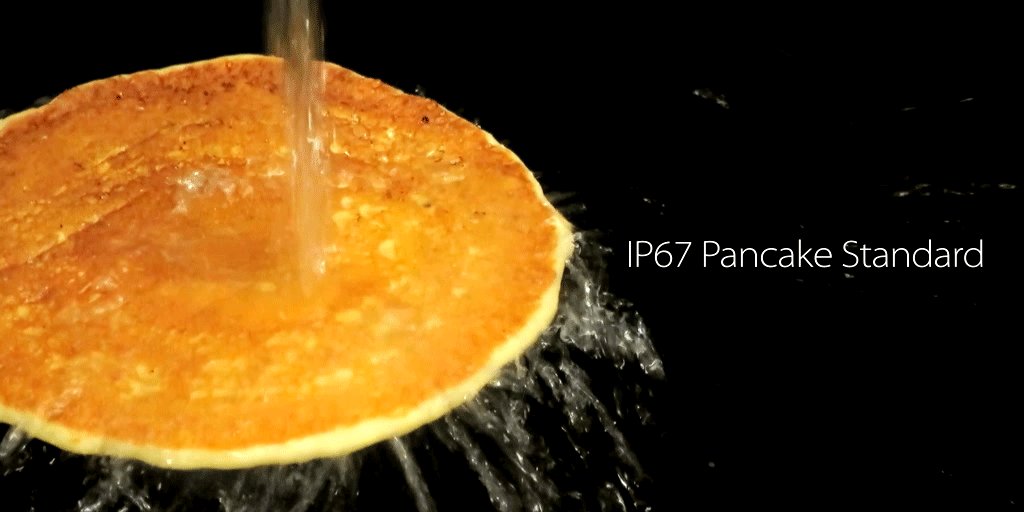 Here’s an example of how Starbucks uses GIFs right on Twitter: 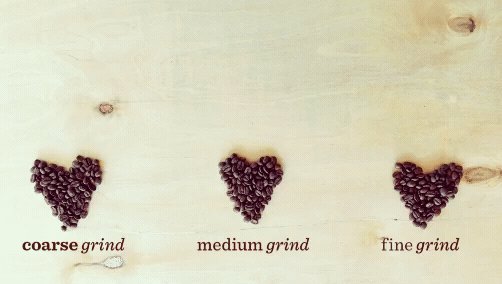 Grind before brew, leads to the best taste for you. Learn which one to use. #CoffeeAtHome

And check out this cool GIF from Airbnb: 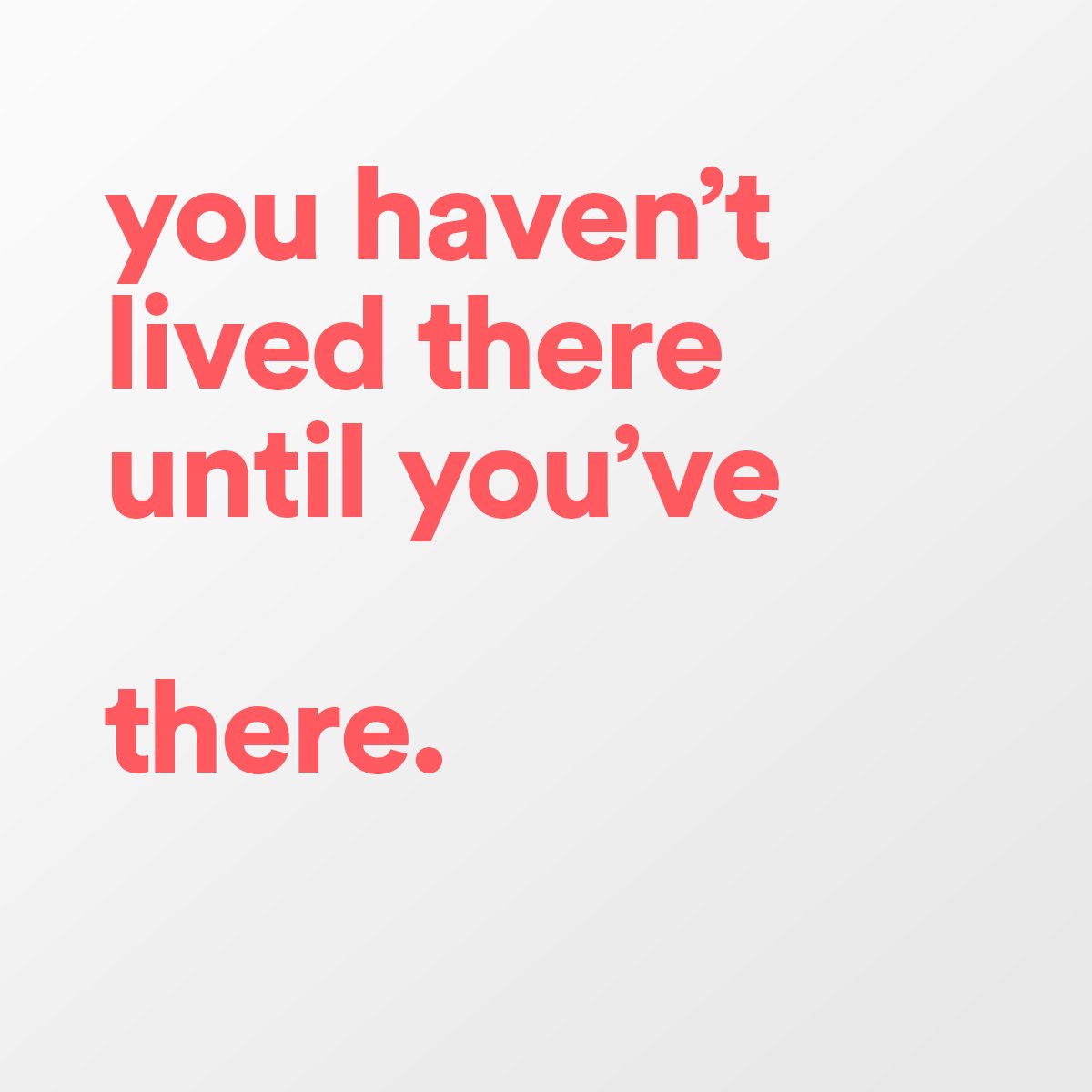 What do you do to #LiveThere when you Airbnb?

And why stop at images, when you can do even more with video on Twitter. Brands can upload videos of up to 140 seconds within each tweet.

It was interesting how KFC recently managed to stir things up with this video campaign around a sunscreen that’s supposed to make you smell like their fried chicken – not a an idea that appeals to my olfactory senses but it helped them generate a lot of engagement:

But you don’t necessarily have to be a large brand like KFC or Starbucks or Airbnb to be able to use visuals creatively in your tweets. Here’s a few examples from a few smaller brands that do this well: 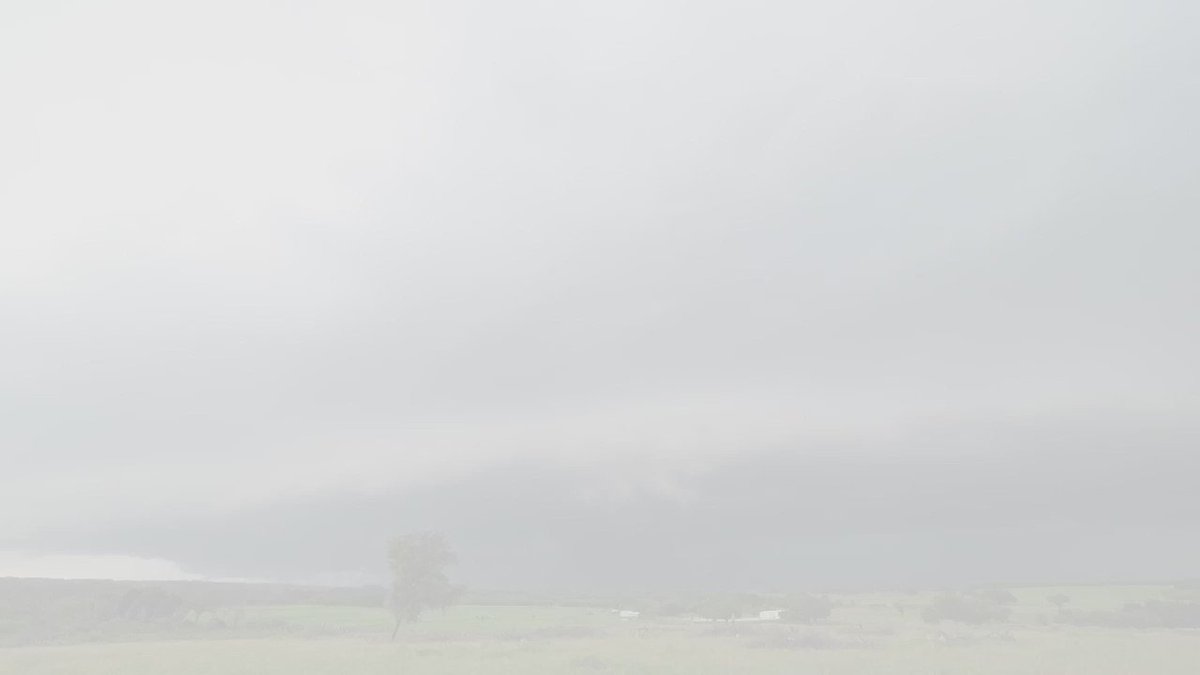 The wait is over. Take out your umbrellas, raincoats & fancy phones. Start clicking! #AwesomeMausam #GrofersMonsoons

Heads Up For Tails 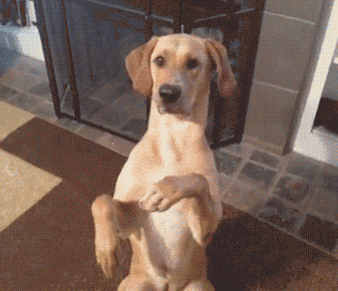 Heads Up For Tails @huftindia

“You shot me down…Bang. Bang” 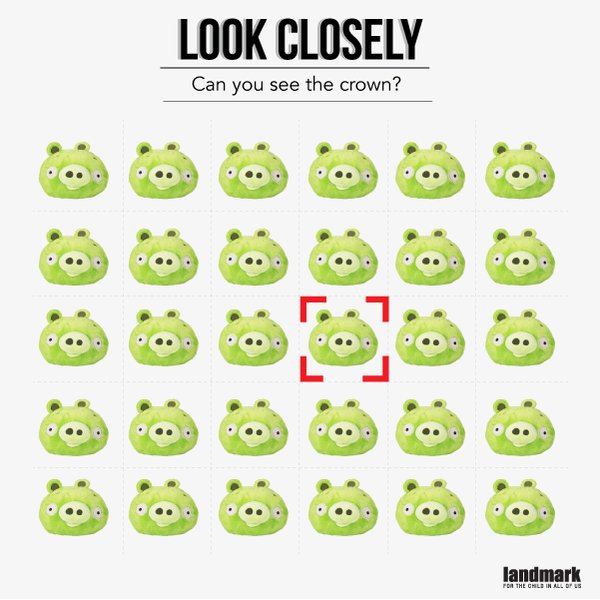 #ContestAlert Stop the GIF when you see the crown & share the screenshot in the comment section below. #LookClosely 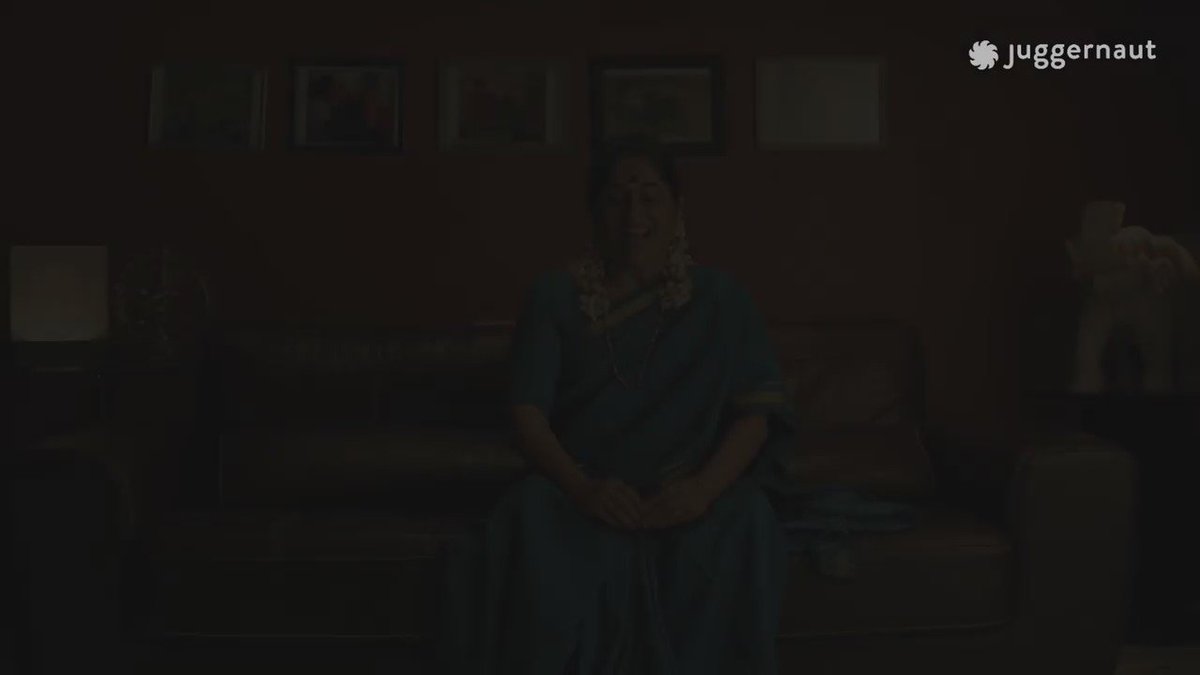 Contest starting in 10 minutes! Watch this video for a hint. Best of luck! #SpoilerAlert

4. Use hashtags and (shortened) links

Using relevant hashtags is a good way to maximize the chances of your tweets getting discovered by a wider audience, including people who may be searching for related content. In fact, if you’re creating content around popular themes that trend on Twitter, including a hashtag (and of course, great content) can be a critical factor affecting how much engagement and reach you can get.

Apart from using hashtags, most brands also use links to direct traffic to their website. If your brand’s objective is to direct traffic from Twitter to your website, using links within your tweet copy can work well – but you can do this even better if your links are shortened using a custom domain that helps you with branding as well as tracking clicks on these links.

A brand that does both these things well within its tweets, is Amazon: 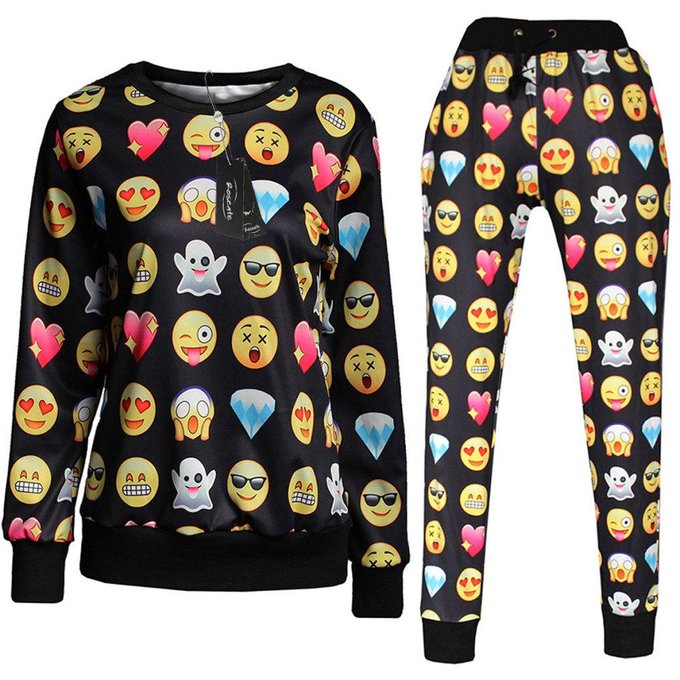 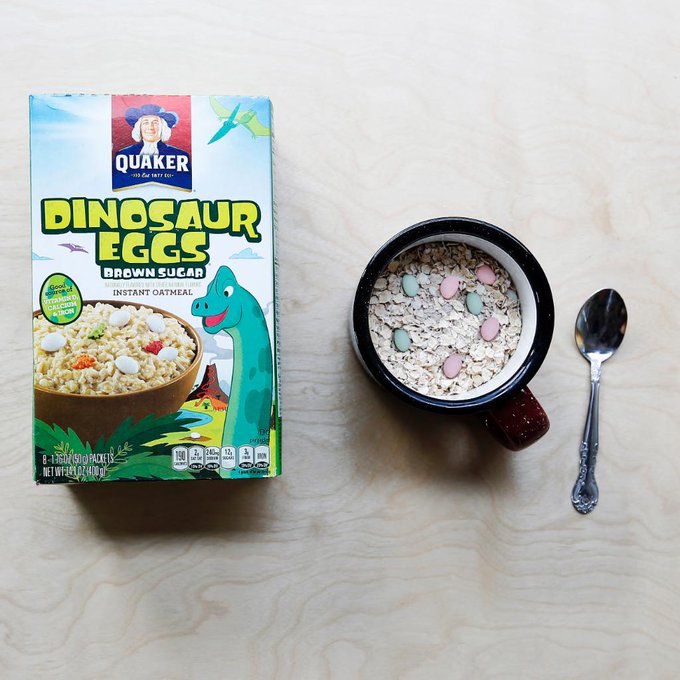 #FlashbackFriday to the days when dinosaur eggs hatched right before your eyes. http://amzn.to/2cL5cqd

Another brand that does this well is Airbnb: 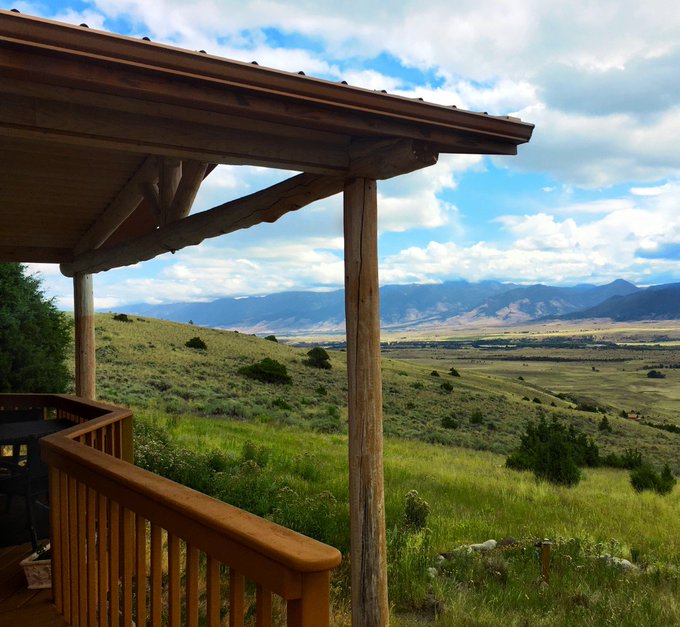 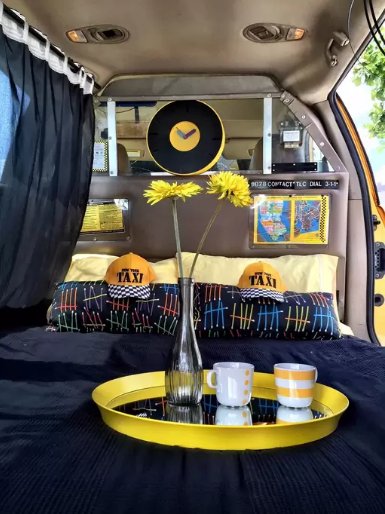 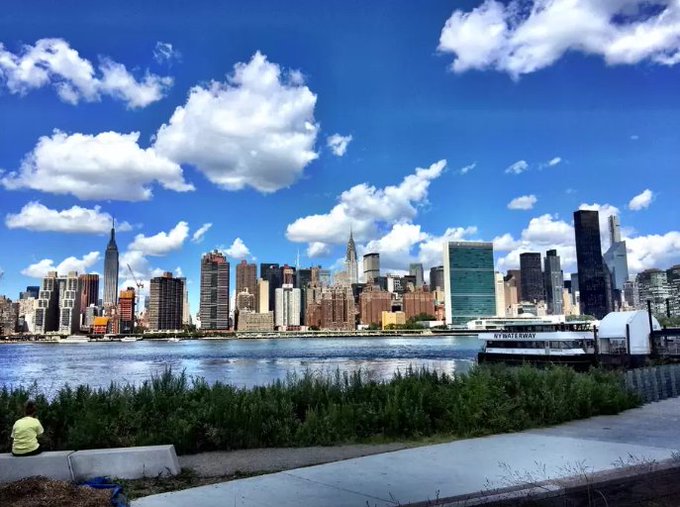 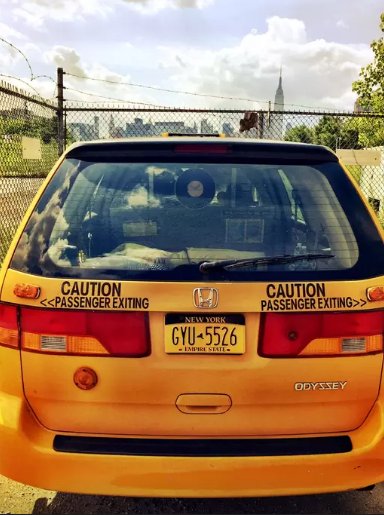 A room on the go for the city that never sleeps:https://www.airbnb.com/rooms/7035403?s=e1NsqJS3 …#LiveThere

5. Retweet and quote your own tweets

Now that Twitter lets you retweet your own tweets, brands can use this to rehash older content. This is a cool way to replug older content that is currently relevant, or content that you think can get a lot more engagement than it did the first time you tweeted it.

You can also use quote to add a comment to your earlier tweets, or to continue a story that you started telling with an older tweet.

With the retweet and quote-your-own-tweet features, your brand can make a #Throwback post from any old piece of content.

If your brand is “listening” on Twitter, you’re most likely monitoring tweets that @mention your business. It also makes sense to expand the scope of your listening to include search results for keywords like the name of your product, the name of your brand and other keywords that are relevant for your industry. Use a social media management tool that lets you add multiple listening streams for Twitter so you can monitor what people are saying about the different keywords that matter for your business.

Listening is a great way to engage your audience. You can interact with each tweet by replying to tweets that need a response, and liking the tweets that only need an acknowledgment and retweeting the ones that you’d like to share with all your followers.

Again, Starbucks is a brand that comes to mind because they do this really well. Considering the exceptionally large number of tweets about Starbucks coffee, I think it’s pretty cool that they manage to find and share the best ones on their Twitter stream. 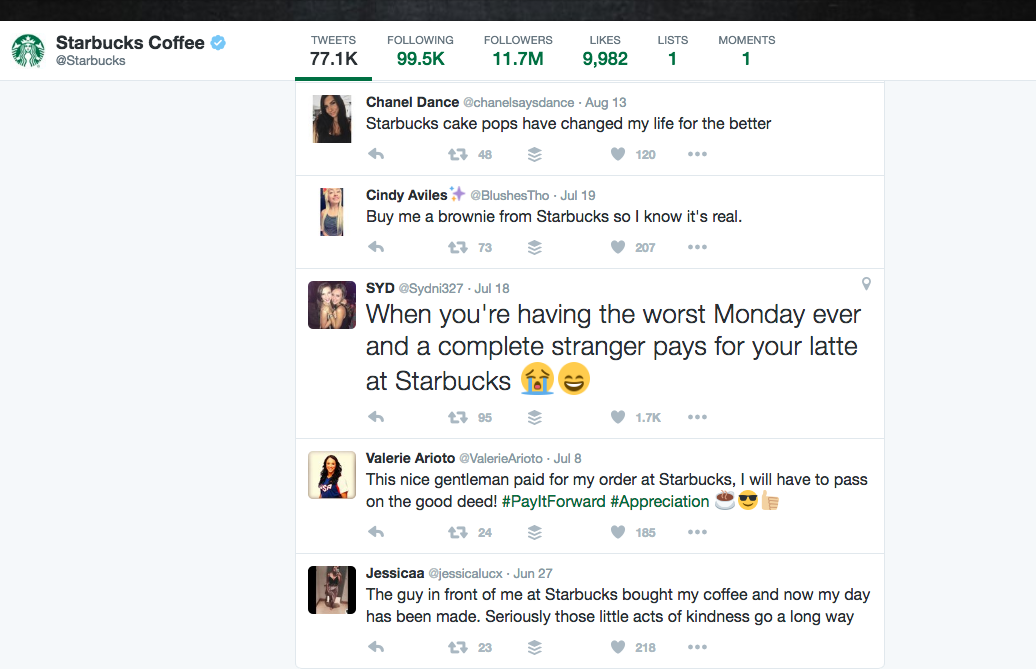 Because of its real-time nature, Twitter is a great platform for offering customer support. Every time a customer tweets to or about your brand, they’re giving you an opportunity to engage with them. Even negative tweets from customers offer brands an opportunity to change the outcome and turn them into positive, happy experiences.

For example, I recently tweeted out about an Amazon delivery that was taking longer than I expected, and was pleasantly surprised when Amazon Help promptly tweeted back with this cute little GIF image:

@AmazonHelp I know, I know! thanks, guys. *goes back to waiting patiently with droopy eyes*

@meerasapra Noo! Not the puppy dog face. We’ve your package, we’re running as fast as we can. :O ^SOpic.twitter.com/0aJ9ae9Taw 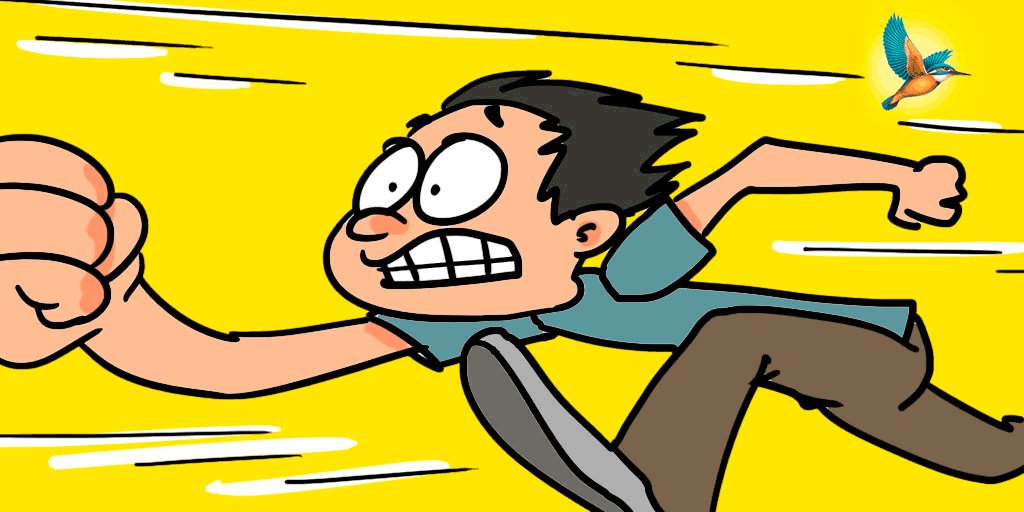 Since Twitter works in real-time, it makes sense to be around and tweet as often as you can. You should be tuned in and listening to tweets about your brand, responding to questions and engaging your audience with great content. Use mobile apps that keep you notified and help you listen to what people are saying about your brand – even while you’re on the go.

If you’re not listening and engaging in real-time, you’re doing Twitter wrong, and it’ll likely lead not only to missed opportunities, but also, in some cases, public humiliation.

This happened to Amtrak recently when they responded to a woman who tweeted about being trapped in an Amtrak elevator at an airport. The trouble with their response was that it was seven months after she posted the original tweet. 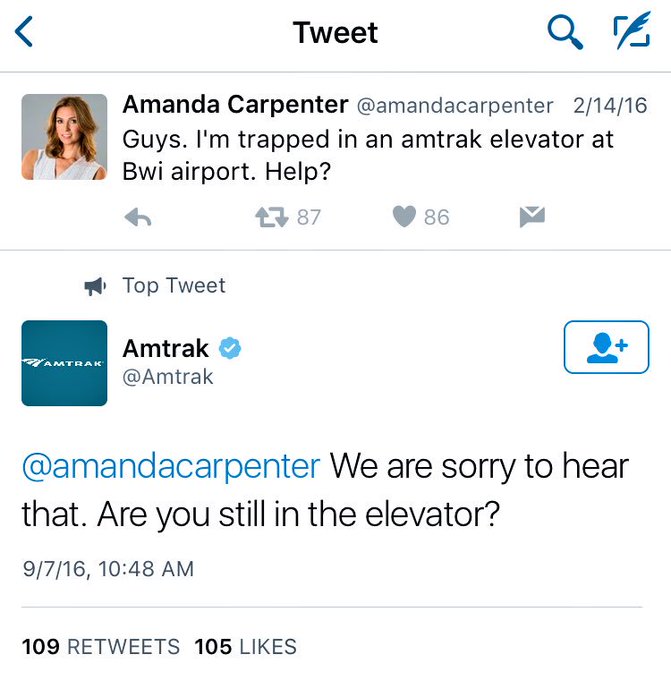 This may be the worst customer service response time ever:

This is a good example of a tweet that went viral for the wrong reasons, and led to some (unintended) humor caused by the brand’s response.

If you’re using Twitter as a brand, I’d certainly recommend changing your direct message settings so that anyone (and not just people you’re following) can send you a DM. Being able to take a public conversation off your mentions and on to the private DM space has a lot of advantages – for one, you can offer better customer support by troubleshooting and understanding the exact problem that your customer has reported over Twitter. It also helps that there is no 140 character limit on Twitter DMs so you can have a longer conversation without running out of space. In fact, Twitter’s made it easy for brands to transition from a public conversation on Twitter to Direct Messages with their customers by letting them add a “Send a private message” link within tweets.

And that’s not all. You can send rich media like images, GIFs and videos over DM. You can send out group DMs that let you have a private conversation with multiple Twitter users in one go. Twitter’s alo just announced support for read receipts on Direct Messages so you can see whether people have read the messages you’ve sent them.

These features make Twitter an excellent platform to use for communicating with your customers.

10. Use a social media tool that talks to your CRM

And finally, I’d recommend using a social media management tool that’s integrated with your CRM. This is important because it will help you identify existing customers when they tweet about your brand. So you can get the complete picture by looking at all the interactions you’ve had with a customer across different channels.

Being able to view a customer’s tweets in the same window where you see all the transactions your business has had with them can be priceless, because this gives you all the context you need to interact with them.

Another advantage of using a Social CRM is that you can add leads from Twitter – these could be people who mentioned your brand or engaged with your content. Additionally, you’ll also be able to track how much revenue your business has earned from your social media marketing efforts.